The willow sees the heron´s image upside down

The willow sees the heron’s image upside down explores how images of landscape have been constructed, both ideologically and technically. It considers the representation of landscape as one of the instances in which the notions of nature and culture converge to show the transits between the two. Through the notion of ruin, it seeks to critically reflect on a series of transactions, typical of the age of colonialism and capitalism, and their visible and invisible remains.

Temple Bar Gallery  + Studios presents Publication Scaffold, a series of events, performances, installations and discussions held during 2019’s Dublin Art Book Fair.  Publication Scaffold finds practical and metaphorical ways of envisaging the process of publishing. It points to books not solely as objects, but as conversation and encounter, as discursive notions surrounding their own existence. Pages turn, words are uttered, platforms for communal discovery emerge. Juxtaposition and serendipity are fundamental to these investigations, leading to new ways of thinking about the portable, malleable exhibition format as a publication itself. 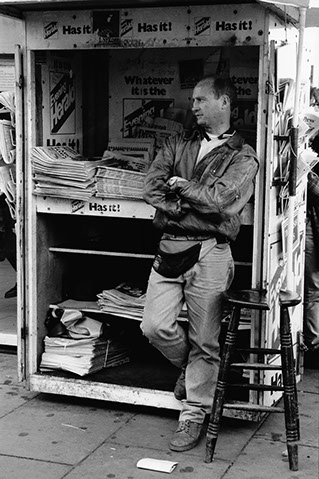 Bandits Live Comfortably In The Ruins 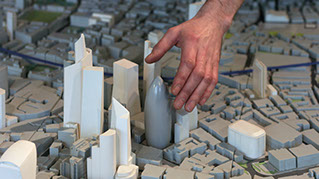 The Rise and Fall of Flint Jack

Accompanied by a new publication co-authored with Jorge Satorre, and a public programme of events with Jo Melvin (curator, London) and Dan Hicks (University of Oxford / Pitt Rivers Museum) 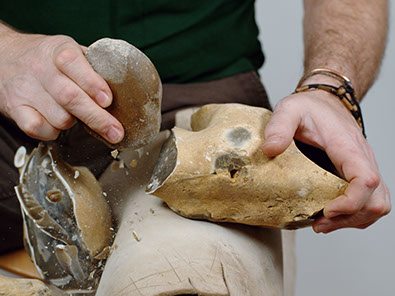 A Murmur, Repeated, by Sean Lynch. Within a varied collection of artefacts, props and sculptures, a new video is presented, shot in the English port city of Southampton. Time travel and spirit possession drive a surreal narrative where a bard from the seventeenth century ends up encountering the empty car park of an out-of-business Toys R Us, Southampton’s geothermal plant, IBIS hotels and the streetscape of the city centre.

Caught between a desire to fit into the constraints of the contemporary world and the seemingly liberal possibilities of a more poetic, distance life of the past, Lynch’s central character, played by Timmy Creed, offers up many opinions about the construction of public space and the role of history.

A new publication featuring an essay by Kevin Barry accompanies the exhibition, digressing from an overview of bardic culture to consider Hollywood screenwriters, Mexican drug lords, and the strange rituals used in the making of verse itself. 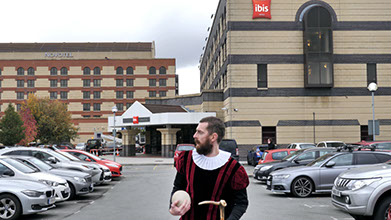 “Two strains of intellectual vulgarity: defenselessness against content and defenselessness against form. The one experiences only the material side of art. It is of German origin. The other experiences even the rawest of materials artistically. It is of Romance origin. To the one, art is an instrument; to the other, life is an ornament. In which hell would the artist prefer to fry?” — Karl Kraus, Viennese satirist, 1910.

‘Cream cheese and pretty ribbons!’ is an exhibition that ventures into the apparently perilous middle ground between too much content and too much form, between too many nouns and too many adjectives, between too much everyday and too much artiness. Are objects or statements that are laden with information – or those that are concerned with utility above all else – at risk of appearing aloof and extorting their own importance? Undoubtedly. Just as art in an abundantly ‘poetic’ mode might be deemed just too delightful and refined.

Drawing on strategies such as disposition, wit, redundancy, or storytelling, the artists and artworks of this exhibition conspire with seemingly mundane things and images to somehow find and invent ways to rebuff, circumvent, surpass, or mitigate this spurious alternative between indulgent contents and bad Romance. An Evening of Technocracy

Irish artist Sean Lynch’s lecture and exhibition digresses on some of the people, objects and ideas influential to his thinking. Swaying between the objective-informative and the anecdotal, topics explored will include folklore, public art, newspapers, architectural ornament and literature. In Lynch’s world, the technocracy and progress of western thinking is a flawed notion, and he sets out to locate moments of potentially poignant resistance to its dominance. Devil In The Detail

Ronchini Gallery is pleased to presents a second solo exhibition of Sean Lynch, entitled Devil In The Detail.

Lynch’s artistic practice focuses on storytelling, specifically unwritten narratives and almost-forgotten histories. With a keen interest in the offbeat and marginal, Lynch’s exhibition brings together a collection of sculptures, photographs, and prints, each pointing to how our environments are brought into being, shaped and understood. As the exhibition title suggests, not everything goes according to plan. Infrastructural mistakes, environmental campaigns, unreliable figures of Irish construction labour and seemingly out-of-control trees all spur on his narratives and investigations. "Endlessly curious and with a detached sense of humour, Sean Lynch’s videos and installations bring attention to overlooked, misunderstood, farcical or fabricated chronicles and narratives. For this exhibition,

Lynch presents two new bodies of work, A Walk Through Time and

What Is An Apparatus?, which delve into how we are implicated in the construction, and even contamination, of history and culture." "The Charles H. Scott is pleased to present the work of Irish artist Sean Lynch in his first solo exhibition in Canada. Lynch is a skilled storyteller with a knack for unearthing little-known or underappreciated stories. While he employs an ethnographic approach to researching the characters and situations that inhabit these stories, his retellings are sympathetic to the eccentricities of his subjects and their social and historical contexts. Whether it is the tale of a pair of nineteenth-century stone carvers, John and James O’Shea, in his work A Blow by Blow Account of Stonecarving in Oxford, or an attempt to trace the path of discarded parts from the defunct DeLorean car factory in DeLorean Progress Report, Lynch fully embraces the allegorical potential of his subjects.

For the exhibition, Lynch presents a new video installation entitled What Is An Apparatus?, produced throughout 2016 in Europe and North America, was completed this fall during Lynch’s tenure as the Audain Distinguished Artist-in-Residence and features locations in Vancouver. While initially appearing as a collection of somewhat ludicrous encounters with nuclear submarines, postmodern architecture, robots, scrapyards or supermarkets, it gradually becomes apparent that Lynch’s stories are generated as the result of living in an increasingly technocratic world. The measures and institutional values that aim to manage and orient human behavior become more evident in each of his eleven tales. Inside the gallery space, an innocuous collection of chairs and tables, scavenged from around the university campus, soon become embroiled in Lynch’s narrative, becoming the subject of a speculative investment opportunity generated by Emily Carr University’s upcoming move to the Great Northern Way Campus.

The new work will be presented alongside Latoon, a video work from 2006 that focuses on the story of a whitethorn bush in Latoon, County Clare. In 1999, folklorist Eddie Lenihan successfully campaigned to have a multi million-euro roadway redirected in order to save the bush, which he had argued was an important meeting place for fairies. The exhibition also includes Adventure: Capital, first presented at the 2015 Venice Biennale. Spanning geography and historic time, its narrative follows a wandering spirit encountering the hegemonic structures that anchor contemporary life and entwined flows of capital, migration and neoliberal spatiality.

Also on exhibition is Campaign to Change the National Monuments Acts, a video installation that investigates the legal status of metal detectors in Ireland. Following national controversy around the finding of the Derrynaflan Hoard, a medieval treasure trove uncovered in the 1980s, the state hastily placed a blanket ban on the public use of all devices used to search for archaeological objects. This legislation effectively destroyed the fledgling Irish metal detectorist community of Ireland. Using the tropes of a promotional video, Campaign to Change the National Monuments Acts advocates for a change in these authoritarian laws, where ideas of nationhood, individual freedom, and the need for new forms of community-led heritage are all explored." "Flat Time House presents Bandits Live Comfortably in The Ruins, curated by Irish artist Sean Lynch. The exhibition broadly explores the attitudes that underpin human relationships to the environment. There is no masterplan of coherence here, or indeed any transcendental experience to be had. Instead, a series of artistic positions, objects and artefacts bargain and improvise through hard-won perseverance and novel invention. This loose grouping proposes no tranquil uniformity or comforts of identifying with history and heritage. Instead, everything constantly mutates, and nothing ever stays the same. Including works by Seanie Barron, Stephen Brandes, John Carson, Burke Kennedy Doyle, Michele Horrigan, Sam Keogh, John Latham, Fiona Marron, Eilis O’Connell, Freek Wambacq and materials from Country Life and British Telecom."

Image: a photograph by John Latham, taken in 1986

This is Tomorrow Review published in A Circular Journal no. 2

The exhibition explores how objects, along the circulation that constitutes their life, accumulate information thus becoming part of a historical process marked by the effects of colonialism. This exhibition tries to celebrate their agency and capacity to affect others, both human and non-human. What cannot be used is forgotten seeks to understand how our relation to the material world entails endless processes of assimilation, acculturation, re-appropriation, and ritualization.

A blow by blow account of stonecarving in Oxford

A blow-by-blow account of stonecarving in Oxford is an installation by Sean Lynch exploring the work of the nineteenth century stone carvers, John and James O’Shea, whose naturalistic renditions of animals and plants are still visible in the architectural detail of buildings in Oxford and Dublin. Sean Lynch investigates distinctive and often overlooked moments in history that have left fragments of evidence, objects and narratives. He explores these sidelined histories through photographic and sculptural installations, prefabricated or found artefacts and small-scale publications.

The O’Shea brothers had completed a series of notable stone carvings in Dublin during the 1850s before accepting an invitation from the University of Oxford to work on the new Natural History Museum. Controversy quickly surrounded the O’Shea’s carvings of primates on the museum’s facade, as many people interpreted the work as a representation of Darwin’s theory of evolution, a contentious and powerful subject within theological, intellectual and social debates of the time. Following a quarrel between the O’Sheas’ and the University, James O’Shea attempted a series of impromptu carvings on the entrance to the museum intended to caricature the authorities of Oxford as parrots and owls. These carvings are still visible on the building today.

Lynch activates this story through a variety of objects sited throughout the exhibition. Subtly placed into the shop and café, a collection of material is exhibited about Favorite, a fried chicken outlet now found on what was once the site of Britain’s first public museum, the Ark, in Lambeth, London. Artefacts from the Pitt Rivers Museum, the Natural History Museum and stone carvings by Dublin-based Stephen Burke each evoke the playfulness of the O’Sheas’ work. In Lynch’s accompanying slide projection, these seemingly unrelated objects come together to weave a narrative about museum culture, public space, individual agency and the construction of history.

Camden Arts Centre is delighted to present a new exhibition curated by British artist Simon Starling, the latest in a series of artist-selected shows.

Conflating works already exhibited at Camden Arts Centre during the past five decades, the works in Starling’s exhibition will be installed in the exact position they occupied the first time around. These fragments of the Centre’s history will be staged alongside new works by Sean Lynch, Michael Stevenson and Jeremy Millar, which represent an imagined prospective programme: the probable past and possible future of Camden Arts Centre momentarily coming together in an unstable present.